Out of the experimental development in the IMHEF high speed cavitation tunnel of the Swiss Federal Institute of Technology Lausanne for controlled airfed profiles a surprising new concept was proven. By a special groove on the surface of practically any profile it is possible to avoid cavitation or supercavitation at high speed and low sigma operation.

Based of the same experimental development, methods were verified for changing lift of profiles injecting air into the grooves.

This development did go a decisive step beyond earlier work done in the early 70‘s and leading to the patent filed below.

for a liquid to flow around at high speed

The term streamlined body In this case means, In particular, hydrofoils for hydrofoil or hybrid boats, supports for such hydrofoils, control surfaces, propeller blades or turbine blades etc. In the case of such streamlined bodies, problems of cavltatlon occur in the water at high flow speeds, for example at speeds above about 25 m/s. Cavitation occurs when the local pressure of the liquid on the streamlined body falls to the vapour pressure at the corresponding temperature, in this case, vapour bubbles are formed, which implode downstream where the pressure rises, leading to cavitation corrosion.

In order to overcome this problem, supercavitating profiles have been proposed, which have a sharp leading edge or other discontinuities on which the flow separates. A cavitation bubble is formed behind e.g. the leading edge on the reduced~pressure side of the profile and, in the case of supercavitatlng profiles, does not collapse until after the trailing edge. Cavitation damage is thus avoided. However, these supercavitating profiles have relatively high drag coefficients, and they can be used only over small ranges of angles of attack and speeds.

The present invention is based on the object of designing a streamlined body in such a manner that cavitation damage is avoided even at very high speeds, and so the streamlined body can be used over a wide range of speeds and angles of attack. This object is achieved by the combination of features In the claims (not disclosed here).

At a speed of more than 25 m/s, the speed in such a mixture is thus supersonic. Pressure disturbances can in this case not propagate unchanged as in subsonic conditions. A pressure change occurring downstream e.g. cannot propagate upstream and cause separation. A further characteristic of supersonic flow is that it is accelerated when the flow cross section is enlarged. Enlarging the distance between the outer flow from the profile surface thus does not lead to flow separation. 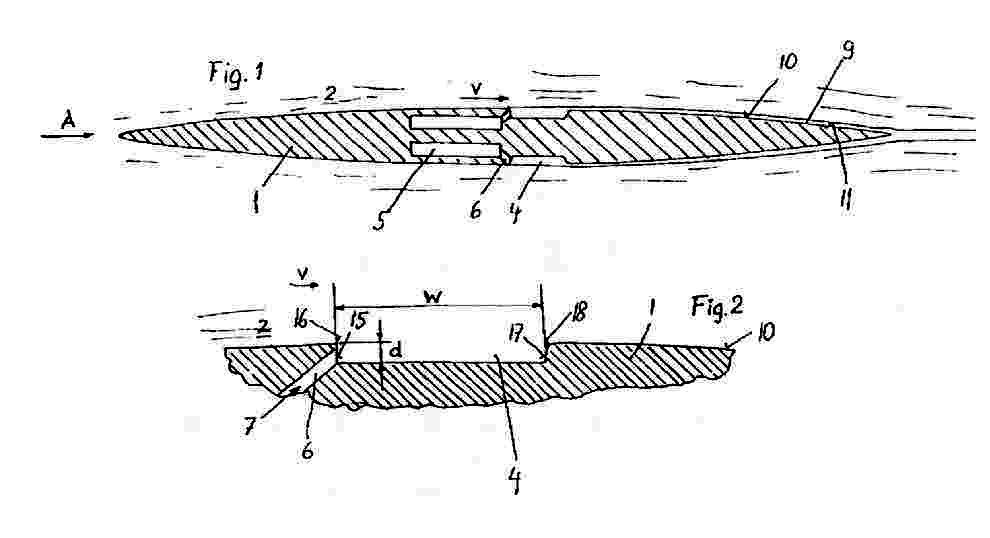